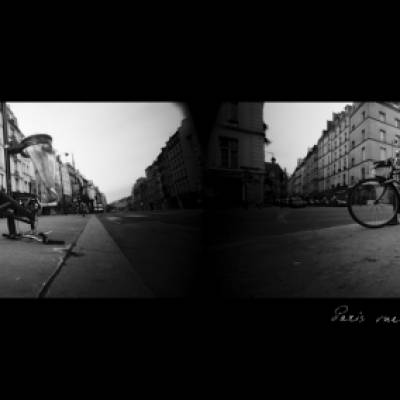 Camera-Obscura – "a dark room" – a dark room or box with a hole on one side /aperatura/, while on the opposite side upside-down images of the objects are projected.

In 350 BC Aristotle describes the optic principle of the “dark room”. He had observed instances in the creation of images by way of the pinhole principle - the sunlight of a partially eclipsed sun projected on the ground through the holes and the gaps between the leaves of the trees. In 1025, Abu Ali Alhazen used the observations of Aristotle of the eclipsed sun to build a dark room with a hole on top to observe the sun and thus creates the model for a camera-obscura. The first most popular description with diagrams is made by Leonardo de Vinci, who compares the camera with the way the human eye works and presents it to the artists as an handy tool for sketching.

The exhibition “Paris through Camera-Obscura”(Paris vue par camera obscura) includes 12 photographs in 98x53 cm format. It is shot with a camera obscura in a 6x12 format on black and white negatives.

The choice of the country, city, camera and theme are not made by chance, they are symbolically chosen.

Thanks to camera-obscura is the first photograph made in history / Heliography/ - “View through a window”(1826, Joseph Nicephore Niepce-France); 13 years later, the so-called father of photography Louis-Jacques-Mandé Daguerre invents the Daguerrotype using the camera-obscura.

The shot images are more emotional symbols, rather than real places and objects. They are references beyond what the eye beholds.