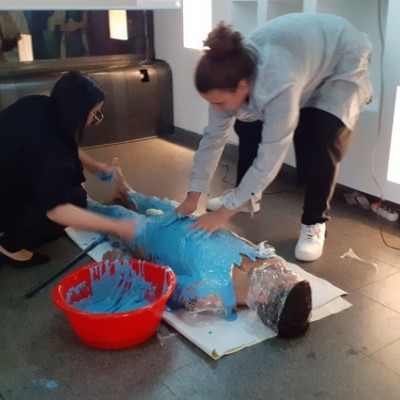 Looking at the shady political landscape nowadays, the collective has chosen to fixate on this year’s  45th G7 summit that was held on 24–26 August 2019 in  France.

The 2019 G7 Summit, presided over by France, was focused on fighting inequality. France has identified the following five objectives for the Summit:

• reducing environmental inequality by protecting our planet through climate finance and a fair ecological transition, preserving biodiversity and the oceans;

• strengthening the social dimension of globalization through more fair and equitable trade, tax and development policies;

• taking action for peace against security threats and terrorism which weaken the foundations of our societies; and

• tapping into the opportunities created by digital technology and artificial intelligence (AI).

7 is a heavenly number, and as once  Jesus depicted and his 7 saints, a game changer proposal is thrown on the table -taking the females transfigured as the modern icons.

Taking a major role in the theatre of G7, they are the distortion lens, the semi transparent perfume curtain, through which the society of the spectacle observes the top. La creme de la cream of all promises reaches the highest 7 peek, and the first deepest steep.

In Matthew 6:24, Jesus cautions His disciples about money. In the verse, Jesus tells them “No one can serve two masters; for either he will hate the one and love the other, or he will be devoted to one and despise the other. You cannot serve God and wealth.”

Not heeding His warning leads to greed. And individual and corporate greed has been known to destroy careers, relationships, families, marriages, communities, the environment and life itself.  When we give into the temptation of greed, we also find it much more difficult to do God’s Will.  How can we even hope to follow Jesus’s command to love one another and God above all else if we become focused on getting more money, acquiring more things and living lives of luxury?

Who , when, why and what is the role of women, and which are the means of measuring power nowadays?

Is equality just a new fake deliverance of social sobrierity?

Transparancy is an illusion of the sedated masses?

What is left is everyone’s little secret-

Join us are the summit!