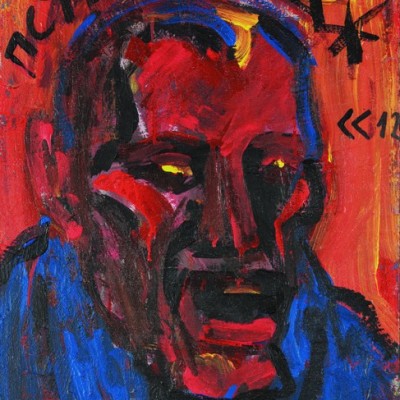 The exhibition of Ivan Kyuranov, RASSIM, Svilen Stefanov, Rosen Toshev and Boris Serginov at Arosita Gallery is for sure an event, which bears the mark of the XXL group, which existed in the 1990s. The authors though, who were part of the legendary group and the gallery of the same name and who used to create installations, video art and performances, today are focused and work in the field of painting. Interestingly  enough, there is an identical turning towards the so-called traditional means of expression in art on the part of other XXL members who have been living and working in New York for years.

What is palpable in this exhibition is the ironical approach to traditional techniques (RASSIM), the use of photographic and digitally manipulated images (Toshev and Serginov) or the transformation of the automatic drawing (Kyuranov). It is obvious that working with the digital image, photographic image and text, that are situated on the territory of painting, create a dual visual construct, which is beyond the notion of painting in its usual meaning. Such an approach enables the crossing of borders of what is being produced in art today - from who knows why still existing "professional" painters' guilds to the even more absurd festival associations that show meaningless derivates of the once mighty conceptualism.

The above mentioned artists' painting is without a doubt filled with conceptual fluids, but at the same time it is in essence tangible - true to its traditional hedonistic will for making, perception and possession. In the collaboration between conceptual and plastic some arrogantly conservative tinges are not unlikely to be found. At an opening of XXL group exhibit in 2010 Svilen Stefanov symptomatically said: "From all art forms the only ones that matter to us are painting, photography and possibly...sculpture." Thus what we are seeing is probably the eclectics of a carefully cultivated ideology of a limited rationality according to which nothing in art can be of crucial importance and everything is possible. Painting, entertainment, high prices. Something like a new spiteful academism with the XXL brand to it?