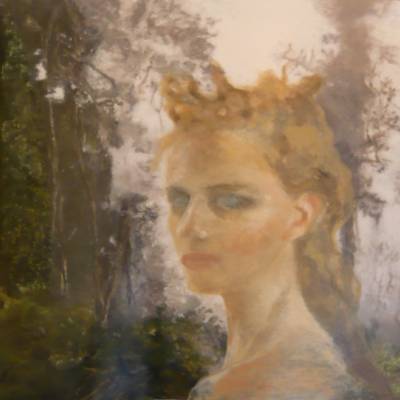 Time is non-relative or a non-adequate concept. For Kosio Minchev, time does not exist, what is important is the happening and the place. Not by coincidence does he choose painting and sculpture since both require special attention and are resistant to the confusing standard of time.

We meet during the first days of October at the opening of his exhibition "Passing beyond " at the "Arosita" gallery. For nearly 13 years he has lived and worked outside out of Bulgaria, his name is not close to mind. The Passage, he tells me should be felt through its various forms - air, water, earth….

The "Passage" is Kosio Minchev's first individual exhibition in Bulgaria for the past 10 years.

My interview was squeezed in spontaneously into his tight schedule during his two-week stay in Sofia. That is before he returns to his NY studio. We have several other occasions for future interviews - after the "Passing beyond", two XXL exhibitions with the participation of his works await their turn to happen. It is inevitable, we go back in time.

This second exhibition with the participation of Kosio Minchev is focused on the 90s and shall be on view for another month. The exhibition presents selected works of the artists from the XXL gallery circle, which right after Kosio Minchev’s name we add the names of Svilen Stefanov, Huben Cherkelov, Georgi Tushev, Ivan Kiuranov, RASSIM, Genadi Gatev, Georgi Rujev, Petar Raichev, Anatolii Osmolovski, David D'Agostino, Boris Serginov, Rosen Toshev, Krasimir Dobrev, and Dimitar Jaranov.

The exhibition "Reminiscences of the 90s" is on view at the Sofia Art Gallery till the 21st of November.

The conversation, of course, revolves around the 90s and the XXL circle, whose radical concepts inevitably lead the way to more provocative ideas. XXL was founded when the artists were all students, tells Kosio Minchev. He himself studied sculpture at the National Academy of Art in professor Emil Popov's class.

Though today he feels as if this "reunion" is technically irrational, in an ideological context it is very timely: “In a sense, we became the exponent of the western and global culture, in which today we reassess and re-evaluat on the scales of my self-criticism. We created XXL purely by intuition and maybe we caught the right time and place. At that moment, maybe it really was the right time and place / for it /”.

The idea of the “Reminiscences of the 90s” came to Svilen Stefanov and Ivan Kiuranov, who are also curators of the gallery. They are among the driving forces of the group, which remained in Bulgaria. Otherwise most of its members left the country and fate / maybe not / placed them at a very close distance to live from one another in the US. Ten years after the break-up of the XXL, everyone reunites in two exhibitions in Bulgaria/ we shall discuss the second exhibition further on /. This though is not a resurrection of the ideology, as all radical ideological practices truly live in the time of their birth. “We were all very rebellious - against the anachronism, inflexibility and conservatism”, continues his story Kosio Minchev. I ask him how it feels to be an artist now in Bulgaria - but from the position of an observer from abroad - and I intentionally stress on the fact that as if nothing has changed for the past ten years. “ Maybe it is so”, he replies and calmly adds that every process requires not only time, but that this stage should be passed through as to get on to the next stage.

Not Time, But Place

Since time is left a second place in this conversation, we move on to the places, to NY. His studio in Green Point is five minutes away from his home in Long Island City. “ I don’t plan farther than one or two days ahead and I try not to waste my time and energy while I’m in the studio”, he tells me. Today the most important thing for me is to work and create for myself.

While we talk about different projects and ideas, we predictably include Jeff Koons, with whom Kosio Minchev has worked four years together. “There was a clash of energies between us, perhaps our egos failed to find a balance between us," he explains. In our conversation he however stresses that he learned a lot from their collaboration with Koons.

Currently Kosio Minchev works primarily with sculpture because "it requires more." He happily tells me about the exhibition of his sculptures in gallery Beaumont in Luxembourg and currently three of the sculptures are presented at FIAC, Paris. Some of his recent work is shown in a Photo gallery here in Zar.bg.

Otherwise he describes his new interests as passing from ultra Conceptualism to non-Conceptualism: “I didn’t understand and didn’t like any more the unleashed world of Conceptualism. I want to set myself aside from the propagation of any sort of post-Conceptualism”, he says. He brings up Geothe’s maxim, which stipulates that one should engage in that which one should not be engaged in. That, he warns, is very risky since the alternative would be not to do anything.

For good or bad, NY is a difficult city, where one can develop such extreme qualities, such as creativity. NY is probably the most un-human and degrading place in the world, such as the segregation of people Kosio Minchev points out. But because of these same factors, however, do things happen. Things, which don’t happen in places like Bulgaria.

Romanticism and friends bring Kosio Minchev back to Bulgaria. “ I am deeply impressed by the romanticism here, by the warmth of the people. By the fact that people here speak sincerely, without any pretension“. Thus we close the circle in the conversation and come back to Sofia and its second exhibition of the group of XXL. As a sequence to "Reminiscences of the 90s", Sofia’s gallery “Akademia” is exhibiting new works of the artist in November with the defining XXL in front. “We want to show what we did then and what we are doing now, together and individually”, he adds.

At the exhibition, opening on November 20th, he shall present one of his last sculptures Erasing the History / Заличаване на историята / , Hitler with a bitten moustache.

The sculpture carries specific historical and political connotations is very well received in NY. Hitler’s bust with a bitten moustache is “a minimalist work with very little intervention, since I bit the moustache just before I cast in the white material, hence it does not exist”, explains the artist. Inspired by the speeches of President Bush, the sculpture celebrated the superpowers of the day, who can change history.

Kosio Minchev’s next project is linked to the display of his famous lambs at the Stephan Stacks Gallery in Chelsea. In other words, the concept here is inspired by the bustle of NY, where a stay there be interpreted in the biblical sense as a sacrifice.

After
Passing beyond, Reminiscences and the Erasing

In the end our conversation sunk into an almost mystical dreamy state. With his new idea to work on, Kosio Minchev aims to explore various human states of being such as the moment, when one falls asleep/ he always is the mystic / cast in sculpture. “To transfer the mystical meanings into sculpture is not at all easy- it can be confusing and confused", he says as if to himself.

This though is a way to feel, understand things, which otherwise would be a mystery to us.