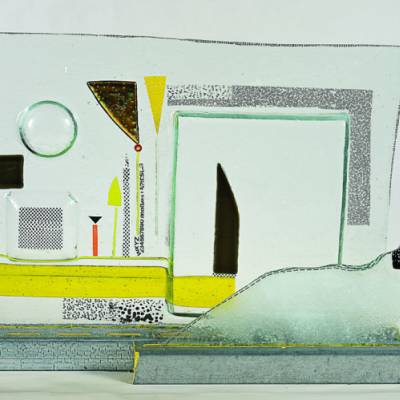 What can be said with certainty is that Ekaterina Getzova is captivated by glass, but is not in the captivity of glass. During the years of work she tries to subordinate the material rather than follow it. The same applies to ideas. Traditional forms, objects and patterns are not sufficient for her. The desire is to go beyond the familiar, to break the frame, to seek new opportunities and applications of the glass mass.

Her new works are different both technologically and in concept. The decorative intention steps aside into a much more modest position. The idea comes to the foreground, and glass is the "garment" it wears. Torsos, heads, utilitarian objects or two-dimensional stories – Ekaterina Getzova opens a new page of perception of both glass and the outside world.

Head and torso are classical sculpture genres. But what if they are transparent? The whole world goes inside them and the whole world is visible through them. The fragility of flesh becomes even more tangible. The body dissolves into the surrounding environment and thus in eternity. This merging process has begun even at an earlier stage – not accidentally, plants and animals are "crawling" up the faces along with numbers and letters - the wild and domesticated life meet and intersect. The sheerness and lightness of glass also seem to have been intentionally "grounded" with fabricated metal mounts, bolts, nuts, spirals. These often have structural significance, but in addition seem to emotionally pierce the glass and its timeless poetic spirit so as to bring it closer to us and into the orbit of living life. A carelessly discarded pair of jeans having retained the shape of the body is another gesture alluding to transience.

The collection of new works by Ekaterina Getzova includes several relief sculptures created from broken glass that is as if found by chance. Although now fallen apart, the pieces are telling stories too, but the image is "collective" at one moment, and “disintegrating” at another. Life appears and disperses into a strange timelessness, which it seems glass alone can reflect.